Sarah Palin, a VP-Nominee from a Republican ticket had a scheduled speech outside Orlando last Sept.21 at the Villages. We are on the way to Magic Kingdom at that time and there was a traffic build up in some roads which was closed for the party to get into their destination. 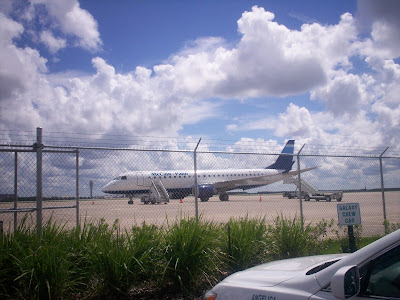 But since we are on the opposite road I am just watching the long line of cars waiting for the signal to go. I remember that same event happen to me in my country that while I am rushing on my way to work , the whole bridge was closed because Pres. Arroyo and some dignitaries came for a visit and I ended up reprimanded at work for being late. Not their fault. Or was it? Hehehe. Just thinking though that these incident happen everywhere. Since, I am not affected with the traffic jam... was just enjoying what I saw. I really wanted to see Sarah in person but we have no admission ticket so, I ended up taking pictures of her private plane. Just taking chances, who knows she might win the VP during the US Presidential election come November 4. 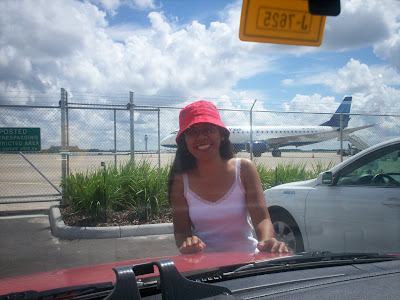 Just taking time to pose with McCain-Palin Private Plane.
Posted by amiable amy at 7:36 AM