I just remember my first encounter of jellyfish. I was swimming in the beautiful beach of DAKAK, Philippines when I saw some jellyfish around me. I was tempted to touch it but, my friend warned me not to. I was thankful because I didn't know that jellyfish can sting. If in case you accidentally hurt by this creature, take note of the following: 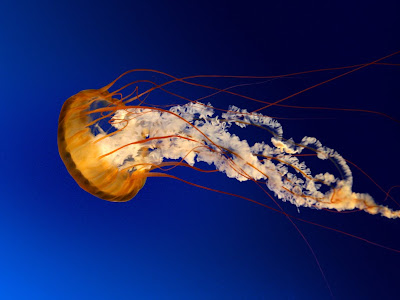 For stings on or around the eyes, dampen a towel with vinegar and dab around the eyes, but avoid the eyeballs. Salt water may also be used if vinegar is unavailable. Do not use fresh water if the sting occurred in salt water, because a change in tonicity can release additional venom. Avoid rubbing the wound, or using alcohol, spirits, ammonia, or urine which also encourage the release of venom.

Beyond initial first aid, antihistamines such as diphenhydramine (Benadryl) can control skin irritation (pruritus). To remove the venom in the skin, apply a paste of baking soda and water and a cloth covering on the sting. If possible, reapply paste every 15–20 minutes. Ice can stop the spread of venom until either of these is available. -source:wikipedia