The most awaited fight of Manny Pacquiao (143 lbs) to his equally good opponent Juan Manuel Marquez (142 lbs) from Mexico is scheduled on Saturday Nov. 12 in Las Vegas. This will be their third fight and because I am a Filipino, I wish Manny Pacquiao GOODLUCK! Go Manny! Win the Fight! 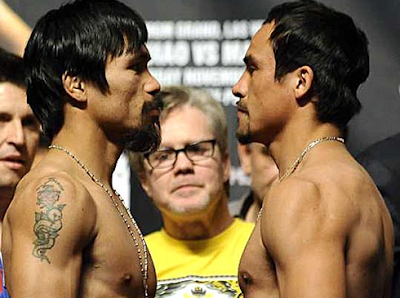 Reading the headlines in many newspapers, Manny Pacquiao has so many positive descriptions. He is known as Pac-Man just like the game Pac-Man eats the pac-dots through the maze and by doing so, Pac-Man goes to the next level. Well, Manny Pacquiao achieved the following: He is the first eight-division world champion and won six world titles as well as the first to win the lineal championship in four different weight classes. He was named as the Fighter of the Decade by the Boxing Writers Association of America (BWAA) in 2000. He won three times in 2006, 2008 and 2009 as the The Ring and BWAA Fighter of the Year award.

Pacquiao maintain the WBO Welterweight World Champion, the Super Champion. He is rated as the number one pound-for-pound best boxer in the world by The Ring, BoxRec.com, Sports Illustrated, ESPN, NBC Sports, Yahoo! Sports, Sporting Life, About.com and more. Manny Pacquiao is known as The Destroyer especially to the Mexican boxers. He is the Fighting Pride of the Philippines, The Mexicutioner, The People's Champ and the Pambansang Kamao (National Fist).

RESULT ON THIS FIGHT BASED ON RING STATISTICS: Manny Pacquiao WON over Juan Marquez based on the following:
*Pacquiao has thrown 578 punches, connecting 176 while Marquez had 436 with 138 punches connecting.

*On powerpunches, Pac had 274 with 117 connecting as to that of the Mexican's 254 with 100 connecting." That is a FACT! Get it over now and stop whining over the spilled milk!
Posted by amiable amy at 3:06 AM