This is the rocket garden located at the Visitor Complex in Kennedy Space Center (NASA) in Florida. This is a nice garden of historic rockets that tells the story of man's quest for the stars. I bought an annual pass at Kennedy Space Center hoping to be in the Lunar Theater when they honor Neil Armstrong, the great American space hero.

My husband and I went inside the complex at quarter to 1 and I knew right then, we will not make it to the ceremony. But anyway, we just take the bus tour (my second time) passing by the Vehicle Assembly Building and stop at Observation Gantry. Hubby and I decided not to go up the observation building anymore and proceed to the next stop which is the Apollo Saturn V Center. 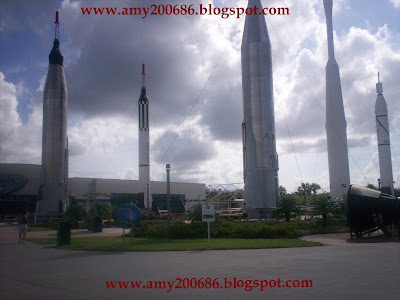 The picture below is the Apollo/Saturn V Center which is a huge facility that display the gigantic real Saturn V Rocket of the famous Apollo program. This facility was built as a tribute to the Apollo Astronauts and the machines that able to lift them to their destination and brought them back home safely. 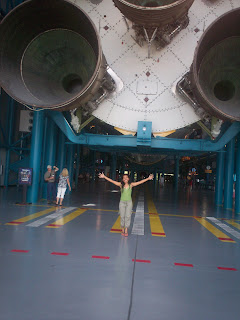 The ceremony honoring Neil Armstrong lasted for few minutes only so; when we arrived, it was finished. We head to the Moon Rock Cafe' for lunch before we tour the facility. Our day ended at the IMAX theater where we watched the Space Station 3D movie.

We lived 15 minutes away from Kennedy Space Center so; we will be coming back here more often.
Posted by amiable amy at 11:49 PM