What I have been doing for the last few days? SECRET, LOL! Anyway, I was watching the NEWS and did my TWEETS. If I have no blog update, scroll down and I am busy twittering too! I assumed that you also witnessed the LIVE Rescue of the 33 Chilean Miners on TV right? It was a HAPPY moment with history in the making scenarios. I tweeted most of the time! As the successful rescue unfolded, I was in great awe how flawless the rescue was. Thanks to the BRAINS behind the rescue. 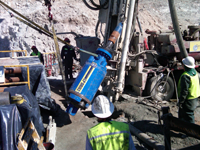 The drilling company who is responsible for the SUCCESS and Faster Rescue of the 33 Chilean Miners is CENTER ROCK, INC from BERLIN, Pennsylvania. More than 2,000 feet underground, 33 Chilean Miners were trapped for more than 69 days. Supposedly, it would take until Christmas to rescue the 33 Chilean gold and copper miners. But, thanks to the engineering innovations, the breakthrough came to reality as the first miner successfully rescued.
Posted by amiable amy at 5:19 AM