This photo is currently making a big fuss on the Internet. Today, it's all over the news so, I think it serves the right to be here for your assessment. I salute the photographer who took this picture, it was taken perfect showing the focal scene of two people kissing amidst the turmoil from the background. Was it for real? How would you interpret it? 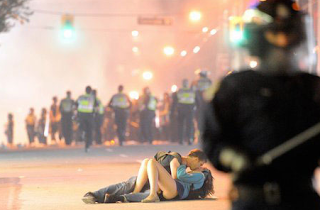 A split second captured on camera made a total meaning of what the world really needs now. LOVE and not WAR! Compassion and not Chaos! The real scenario of a man extending an act of kindness to a wounded person on the street.

Happened in Vancouver after the Game 7 of the Stanley Cup Final, a riot ignited and pinned between the angry rioters and charging riot police are: Aussie bartender Scott Jones and Canadian college student Alex Thomas. She was injured just before the picture was taken. The mother of Scott knew it was him upon seeing the picture because he always wear the same clothes. Well, she meant Scott bring few T shirts and jeans on this vacation.

If you want to know the latest "love sparks" between the two, all you have to do is wait for another news to come up. Or make friends with Scott's father, Brett Jones in facebook. Good luck for that. Spread good deeds people and stay out of trouble!
Posted by amiable amy at 8:32 PM