Where the Remains Found: Caylee Anthony

Hubby and I watched the Casey Anthony Murder Trial which is LIVE in Fox Orlando channel. While doing some chores of course, our TV is glued on that channel. During their recess for lunch, hubby and I decided to visit the crime scene where Caylee's remains was found. I was reading my blog in July 2008 and found that link. I was one of the hopefuls that Caylee will be found safe and alive. 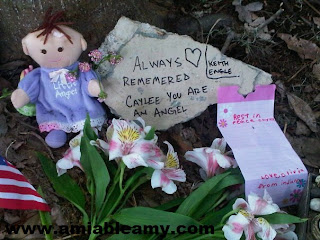 Well, we now know that she was dead and her body was tossed right here in this eerie woods with snakes and crocs. The picture above is where her remains found. People are making it a memorial. 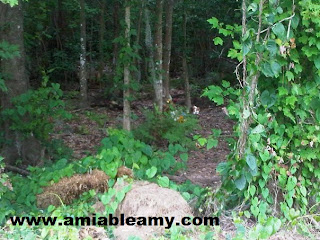 Taken from the side of the road, this is the distance where her body was tossed inside a trash bag. Later it was found out that her body was chewed by some animals. Imagine the animals are feasting on her tiny body while her mom go party, living a good life. That is why CSI's can't determined the cause of death. There's nothing left of her. But, finding the duct tape attached to her skull tells a story too. 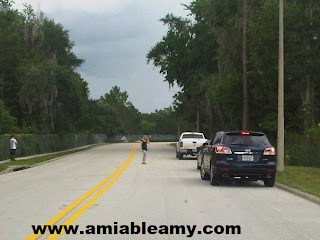 Further down of this road is a dead end where a school is located. On the right side is the crime scene where her body was found in Dec.11, 2008. This place is a wet area because as what I keep on blogging in 2008, there was storm and the big one is Storm Fay!
Posted by amiable amy at 2:56 PM