The Final Flight of the Space Shuttle Discovery

April 17 marked as an important date in NASA. The Space Shuttle Discovery Departs for the Smithsonian's National Air and Space Museum. 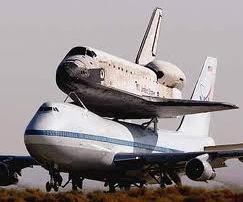 From the first shuttle launch on April 12, 1981 to the final space shuttle mission (STS-135) which was ended July 21, 2011, the space shuttle’s 30 years of mission has become part of our humanity. The space shuttles: Columbia, Challenger, Discovery, Atlantis and Endeavour spacecraft’s have carried people into orbit. It recovered and repaired satellites as well as conducted cutting-edge research. It also built the largest structure in space, the International Space Station. April 17 is a sad day for the people here in Kennedy Space Center because space shuttle is making its last flight from KSC to retire at Smithsonian's National Air and Space Museum. The workers who are working on the space shuttles will also be laid off after this big event. I will be witnessing the takeoff tomorrow … and anguish of the life situation of the affected families and affected business establishments. May God bless them.
Posted by amiable amy at 11:13 AM