This baby gator should be hibernating by now but, guess what, baby gator wanders along the corner canal by the NASA Parkway and Space Commerce Way roads. Baby gator looks friendly but, because of their nature of course, getting close is dangerous.

Here's one guy who took a picture of the gator so close and his companions told him to back up because if he lost his footing, he could go down the canal.

Nearby in the water is another gator observing us with the head showing up.


Then, further down the canal, another gator swimming towards us. Well, we were just thrilled to see 3 baby gators along this area. We know that there are gators here but, we didn't expect to see 3 gators trying to go up to the road.


Hubby and I were heading to Merritt Island and we decided to drive the NASA Causeway / NASA Parkway west route. As we turn to Space Commerce Way, we saw 2 cars parked on the grassy area beside the road. I told hubby that they must saw an alligator so; we were curious how big it was. We turn and I took these photos.

From the passenger's seat, I saw that they were looking at the baby gator trailing its way up.

I went there to take pictures as well and hubby took a snap photo of me with them as well.


The commuters of this road are not very many but, when they saw us, they stop, look and take a picture as well.

No one harm the gators and all of us respect their habitat. After taking the photos, we all go back to our cars and leave the gators alone. 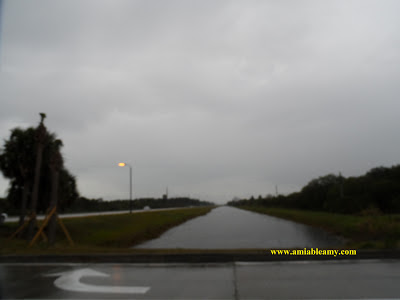 The canal in this area looks like the photo above and further is the Kennedy Space Center. 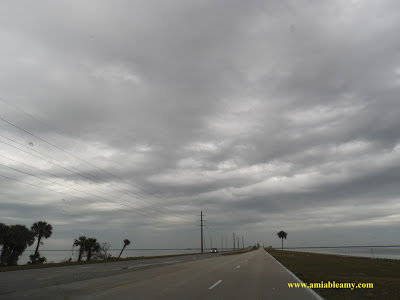 The waters between this NASA Causeway / NASA Parkway West is called Indian River Lagoon. If you are not familiar with Florida waters, let me warn you that when there is water, gators are expected and beware of marsh lands and wet lands. Enjoy your day everyone and thanks for stopping by. Check out my other posts.
Posted by amiable amy at 8:06 AM