I took this picture in 2008 and I had a wonderful time admiring the floats decorated with thousands of the fresh produce of oranges, tangerines, and citrus of different varieties. 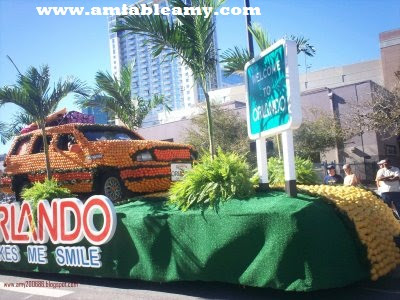 The Fresh From Florida Parade is formerly known as Orlando Citrus Parade is scheduled tomorrow, December 31, 2011 at 11 A.M along the streets of Downtown Orlando. The parade will start at Orange Avenue and Robinson Street. It follows south to Anderson Street, then over to Rosalind Avenue, and finally north back to Robinson Street. So, if you are heading to Downtown, avoid those streets because it will be close at 10 A.M. Remember, between Garland and Lake Avenue, you should avoid the following: Church St, Pine St, Central Ave., Washington Ave., Jefferson Ave., and some side streets will be close at 8 A.M. for parade preparations.