Early dawn, around 2 AM, I chatted with my friend who is already a Principal in Palalan Elementary School, Soutwest District of Cagayan de Oro City, Philippines. He showed me the pictures of his school's project this month, it is a Mural Painting. This is the second school that I, in my little means shared my blessings. The other school is Agusan Elementary School, both in the same city. Well, this school is different because this is located in the hinterland. The parents to most of the 157 pupils in this baranggay are farmers in a parcel of land good for their family's survival. 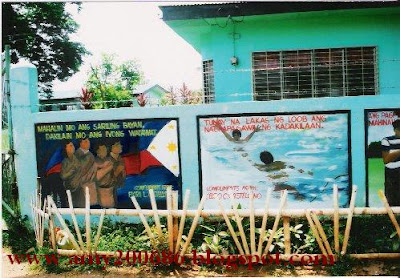 They painted the wall fence surrounding the school area to make it pleasant to see. That is only a minor part of making the school as a place of cleanliness and most of all for learning. This project would last at least three years until the paint will fade. So, the money I sent to support this kind of project was worth it. I do not publicized my name on the wall though. To see the pictures and the realization of the project was enough for me. 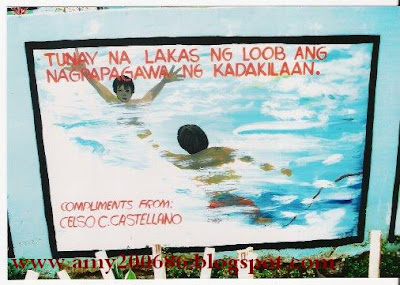 The message on the Mural was written in Filipino to show patriotism in the country. I know how hard it is for the Department of Education to supply all the demands of each school for the entire nation that is why, in my own way, I support the Principal in their cause of making a little improvements of their school premises. 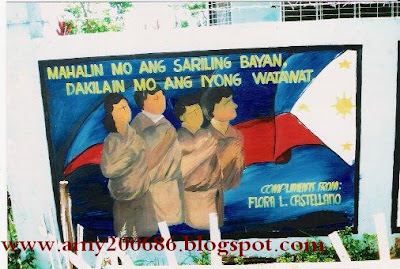 Joel, the name of the principal told me how it ached him seeing children come to school without shoes....not even flipflops. So, I made a promise to do something about that at the end of this month. After the mural, children this time. I know what he said were all true because we were once assigned in the farthest school in my city where we have to walk on foot the 8 kms just to arrived the school zone. This school is better than what we have been to. Anyway, the pictures below are just few kids in first grade. As a principal, he can not impose the parents to buy uniforms because they have limited income and that is the scenario of the students in public schools. Children eager to learn without the comfort of material things. How precious is that? That is why I am so blessed that I saw the real issues of our society because I learned to be compassionate with others. 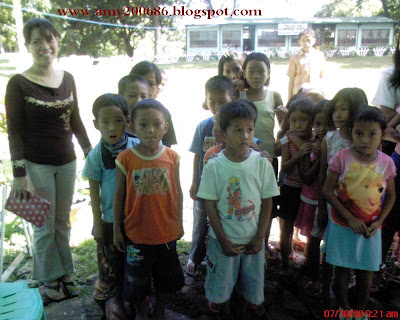 It humbles me to be reminded of such event of my life and at the same time, I am aching inside. That is their classrooms at the back, at least those are concrete already and not a NIPA HUT ( made up of a coconut leaves, bamboo and wood). Yes, they come to school in this attire and would you believed it if I say, this is their best clothes already? Look at their feet, did you see a kid wearing shoes? Not one! They all wear slippers or flipflops. 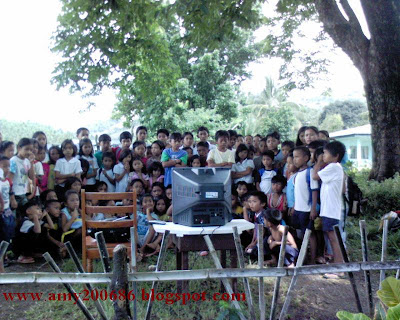 These are the kids TV time. It is called "SineEskwela", Department of Education project which enable the children learn something what they see on TV. The lesson was created with objectives , subject matter, motivation and it is also inter-active. It is not just TV Watching. Check the video in {here} as Lea Salonga explained it. They were outside and under the tree, having a class because during this time, there is no vacant classroom. Sad right?

(About the attire of the teacher at the left side, I have to say, this is not her usual attire when she comes to school. Teachers are compulsory to wear uniforms everyday and fully groomed. )Check this topic that I wrote in NOSTALGIC. Thank you for reading friends.
Posted by amiable amy at 9:15 AM