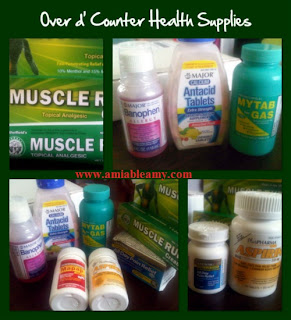 (The medicine and med supplies above are given for FREE by his healhcare provider every month. He can choose whatever he needs from band-aid, allergy meds to weighing scale and more.)
Anyway, back to Wal-Mart: because of that incident stated earlier, my husband quit buying in Wal-Mart and chose TARGET for shopping instead. He also transfered his prescription to CVS. Guess what? CVS told us that his prescription is TOTALLY FREE because all medicationa are under the coverage of his insurance. Can you believe that? My husband had been paying his prescription to Wal-Mart for almost a year now. He was wondering why so; he called and asked his insurance company. It was found out that Wal-Mart never contact the healthcare insurance company. Not once. The only record showing was CVS inquiry. Wal-Mart Rip us again!
If you have prescriptions at WalMart and you are paying for it, you better check out your insurance. If you want to purchase on gardening stuffs such as lawnmower, edger, and  more, DONT BUY AT WALMART.
Posted by amiable amy at 11:31 PM

Email ThisBlogThis!Share to TwitterShare to FacebookShare to Pinterest
Labels: wal-Mart Rip Off, walmart
Newer Post Older Post Home
Disclosure Policy is valid from 21 October 2008. This blog is a personal blog written and edited by amiable amy. For questions about this blog, please contact me thru "comments" area of any post. This blog accepts forms of cash advertising, sponsorship, paid insertions or other forms of compensation. This blog abides by word of mouth marketing standards. I believe in honesty of relationship, opinion and identity. If it is a sponsored post, it may influence the advertising content, topics or posts made in this blog. That content, advertising space or post may not always identified as paid or sponsored content. Any product claim, statistic, quote or other representation about a product or service should be verified with the manufacturer, provider or party in question. It is the sole responsibility of the reader to weigh the product endorsement as legitimate.