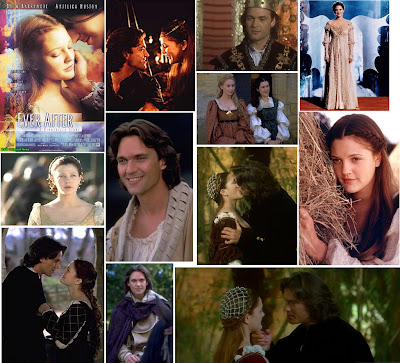 Have you ever watch a movie that made you feel so in-love? And made you cry not because it was dramatic but mainly for reason that it feels so good to be true. What was it? Ever After is just one of my favorite movies. It was a 1998 movie starred by Drew Barrymore and Dougray Scott. This is a Cinderella movie. The movie started when the brothers Grimm arrived at the home of a welthy Grande Dame (Jeanne Moreau) who speaks of the many legends including the true story of her ancestor. The story then flashback on Danielle (Drew Barrymore) who is 8 year old, daughter of a wealthy widower and a 16th century landowner. The father dies of a heart attack after returning to France with his new wife Rodmilla (Anjelica Huston) with 2 daughters. For 10 years, Danielle is now treated as a servant by the evil step mom and the eldest daughter. At this time, Prince Henry ( Dougray Scott) is fleeing the palace, angered by an arranged marriage and his path crossed with Danielle. Later, when Danielle poses as a Lady, the Prince takes an interest in her. Inventor-artist Leonardo da Vinci (Patrick Godfrey), accepting the French court's patronage, offers advice to Prince Henry on matters of the heart. Everyone knows the Cinderella story right? It ended that way...hehehe. What I ike in this movie is the humor and depth of the character of Danielle as to how she hope, a compassionate woman to her subordinate and having an admirable patience which is hard to endure in reality. Oh well, it ended happily ever after.
Posted by amiable amy at 10:45 PM