Protest Against Plans to Ban Online Piracy: SOPA and PIPA

When you used the google today, were you surprised to see the sensorship bar blocking the google word? There is nothing to worry and that is not a virus! Google is participating the protest against the plan to ban online piracy. 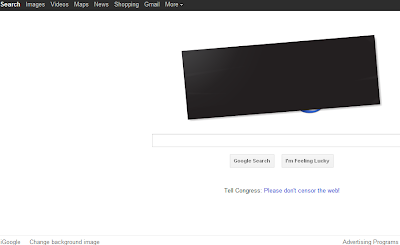 Giant Websites such as Google and Wikipedia participated the online protest. The blackout is against SOPA ( Stop Online Privacy Act ) which is a House Bill and PIPA ( Protect Intellectual Property Act ), a Senante Bill.

There are arguments that these two Bills were too vague. Also, it will eventually give the government too much power to shut down Websites accused of copyright violations. Their concern is the "what if" the site accused will be later found as innocent, the harm is already done. Not only that, a lot of Website giants will be affected in some ways.

Anyway, I did try to put my cursor on the black bar and this came up: "Tell Congress: Please don't censor the Web" Are you participating the protest? Just curious.
Posted by amiable amy at 10:44 AM