Who would have ever thought that Denver Broncos will win over Pittsburgh Steelers? I was in a dilemma today because Pittsburgh Steelers is my first favorite team. They are the champion in Superbowl XLlll in 2009. In fact, Steelers won the Superbowl Championship for 7 times. That's an awesome record. In 2011, they are the second best during the XLV Superbowl Championship since Green Bay Packers defeated them. 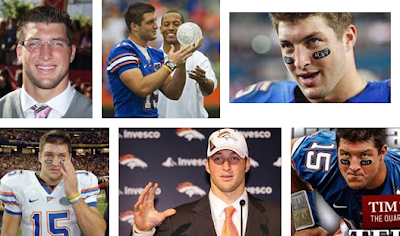 Broncos is the underdog. Remember, the quarterback of Steelers is Ben Roethlisberger, a well respected QB. Broncos has Tim Tebow who played as Quarterback not so long ago. A newbie in professional football and hated by atheists. Today's game is a living testimony that as long as the game is not over, there is HOPE and MIRACLE. The Broncos stun Steelers in over time and for 11 seconds, Tim Tebow passes the ball to the receiver and Thomas run the 80 yards and made the touchdown. What a great game. Let us start tebowing.
Posted by amiable amy at 11:46 PM