This was the scenario of the first day of Kingdom Rock #VBS at the Divine Mercy Catholic Academy in Merritt Island. There were a lot of student volunteers and good number of adults. On the first day, I was on the registration table taking the names of the participants for checking in. We started on time and when everyone went to their respective groups, I went back to my pre-school kingdom where we have 18 cute and adorable little ones. 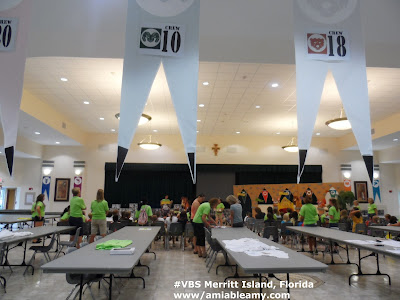 First hour of the day was a bit unorganized but, pretty much adjusted the flow in an hour. Everything was set up accordingly, KUDOS to the organizer especially the Director of the Religious Education Ms Mary Frances Coburn. That's her wearing green t-shirt at the middle of the photos. 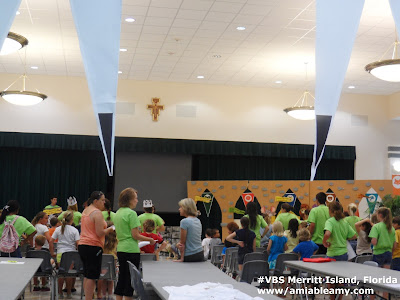 On the first day, the children were being introduced of the Bible Buddy, Truman which is a bulldog. The children were taught that "God's love helps us ... stand strong."


I was in-charge of the crafts and there were 4 crafts to choose from. We made the crown, have the kids color and wear them. Questions like, "How does God loves us? and "How does God show his love to you? " were being asked to the little ones and they answered great. They were very attentive!

The lead volunteer is Ms Ginny who was in-charge of the story telling while the in-charge of the games was Ms Terri. Both were very enthusiastic and they sure can handle the group after all, they have little ones of their own. They were very motherly, very patient and they tried their best to inculcate what's to be learned for the day.

On the next day ... kids came back. It means one thing, the children loves to learn the word of God in "Kingdom Rock". Up next... photos on the second day. Thanks for stopping by.
Posted by amiable amy at 8:05 AM