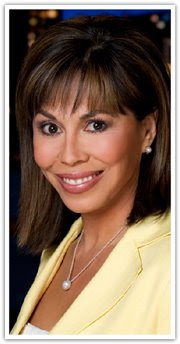 Laura Diaz, anchorwoman from CBS KCAL 9 is an eight-time Emmy Award winner. Not only that, she won an Emmy in 2006 for Individual Achievement in Feature Reporting category. Her luck did not stop there, she also won back-to-back Golden Mike Awards in 2005 and 2006 for best feature reporting. Her success will be trace up with her perseverance to go one step higher. She is very passionate in writing and loved public speaking. In 1985, her career as a TV news anchor has started and after three years, she had a weekday evening news cast. She covered historical stories happened in Southern California. To name a few : First Interstate Bank fire, the Northridge earthquake and the Los Angeles Riots. During the riots, Laura, while trying to gather a story, was held at gunpoint by angered Angelinos. And the rest is history. She supported a foundation that is very close to her heart. CBS Anchorwoman Laura Diaz is one of the advisory board of trustees of The Joyful Child Foundation.The foundation was started by children's advocate Erin Runnion. Laura's commitment to this cause grew from her extensive coverage of the murder of Erin's daughter, Samantha, by a sexual predator in 2002. The foundation works to organize neighborhood watches around the country and keep child predators off the streets. Support her TV show and Visit Anchor Laura Diaz Online.
Posted by amiable amy at 8:34 PM